When the costs of the Middleton to Denton section of the M60 overran hugely, the taxpayer footed the enormous bill.

That will not be an option with the proposed A555.  Any cost overruns (and they are potentially huge) will be paid for by you and me - the council taxpayers of Stockport, Manchester and East Cheshire.

Have a look at the evidence below and start saving up!

Mouchel developed the M60 Denton to Middleton Section. They are also working on the proposed A555 as I understand it, and am in the process of checking.

This comment was posted up by a local person:-

"As soon as that motorway was opened there were signs about the flooding. This was meant to satisfy the inept consciences of the developers/planners and engineers. Where was the sign to say that you enter it in the fast lane. Until someone is killed that will be the most appalling junction (at Bredbury). Caravans and HGVs are NOT allowed in the fast lane - unless directed. Again a get out clause by the developers, planners and engineers. It is an accident waiting to happen and mark my words one day someone will be killed. But until that day.....Sleep well Mr Mouchel"

This raises concerns for me given what has gone on with the M60 Denton to Middleton Section. See the report below from New Civil Engineer Project Study: Manchester's M60

"....last minute redesigns for 28km of cable ducting.." ... "a 50% overrun on its planned three year, £110m contract and with a claim bill likely to be settled at around £40m..."  "... a 130m long skewed tunnel-like rail underbridge which needed its piled foundations redesigned when Railtrack banned the piling rigs..."  Didn't they check with Railtrack first????

"The motorway cut through the 2,680 megalitre Audenshaw reservoir. Divided into three separate sections, the reservoir is temporarily losing about a third of its volume.  One section was drained allowing the motorway to cross it just in front of the new dam. With both complete, the reshaped area behind the dam is being refilled.

"Both of the dam's 60,000m3 clay core, and its 340,000m3 sloping shoulders formed of weaker clay, were to be won from a deep cutting near the other end of the contract. All went well with the core and about a fifth of the shoulder material until lcay quality in the cut deteriorated dramatically."

"The remaining clay was too wet and weak to use, so we faced a shortfall of 270,000m3 needed for the shoulders", says Highways Agency project engineeer John Dutson. "The extent and interpretation of the original site investigation boreholes missed what proved to be an extensive volume of unsuitable material"

"an alternative clay source was eventually found, ironically right alongside the dam, in the bed of the now drained section of reservoir.  But only a 1.25 m depth of shoulder could be laid per month, and none during the seven month closed earthworks season, to allow dissipation of pore water pressures.  Knock on setbacks accounted for a year of the contract's 18 month delay. 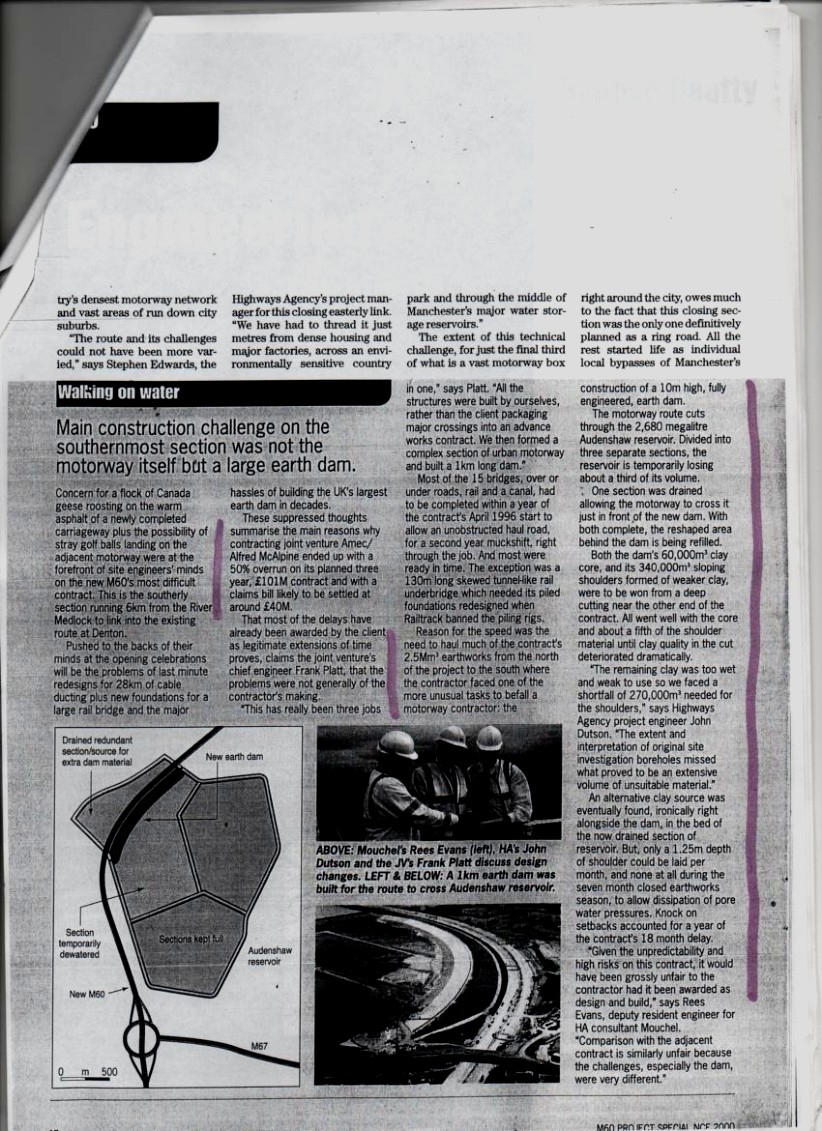 "Final construction should have been completed 18 months ago and client the Highways Agency faces a total bill for the main construction of at least £300 million, an increase of £80 million on tender prices." 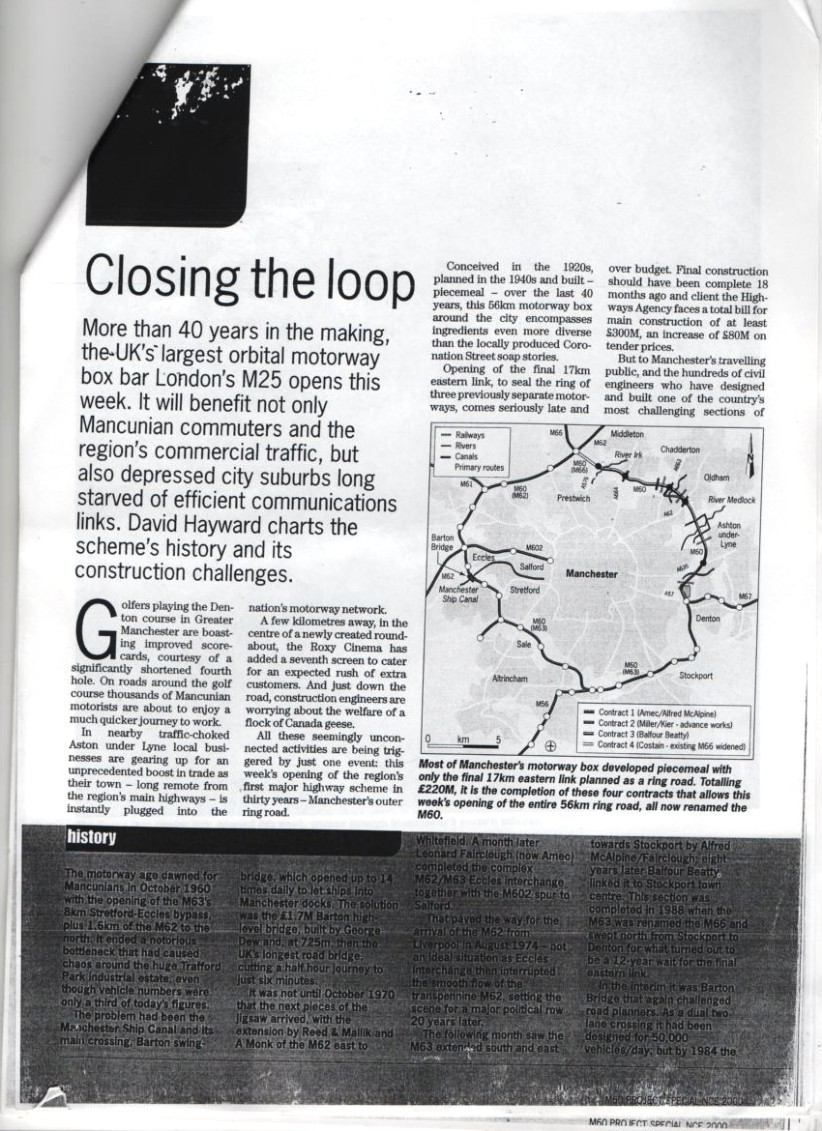 "A SENIOR Highways Agency official has admitted that drainage and surfacing problems are causing serious flooding on a recently built section of the M60 near Manchester.

'The spray being experienced is worse than anticipated from that on other similar motorway surfaces, ' said Highways Agency board director Richard Bennett in a letter to a local MP seen by NCE.  Bennett was writing on behalf of Agency chief executive Archie Robertson.  He also confirmed that there are problems with the road structure and drainage.  Flooding on the M60 is most severe at junction 23 by Ashton under Lyne. The anti-clockwise section here incorporates a four lane carriageway, a two lane slip road and hard shoulder.

Last week, that section of the carriageway was closed for seven hours and fire fighters pumped floodwater up to 700mm deep along 300m of carriageway into fields.  The flood-prone section is Sshaped and stretches for 6km north from junction 24 at Denton towards junction 22 at Oldham.  This section was built by Amec and Alfred McAlpine for £141M and opened in October 2000, 18 months late (NCE 2 November 2000).

'In addition to the spray problem there are a number of issues associated with other pavement layers and the motorway drainage system, ' said Bennett in his letter to Denton & Reddish MP Andrew Bennett." 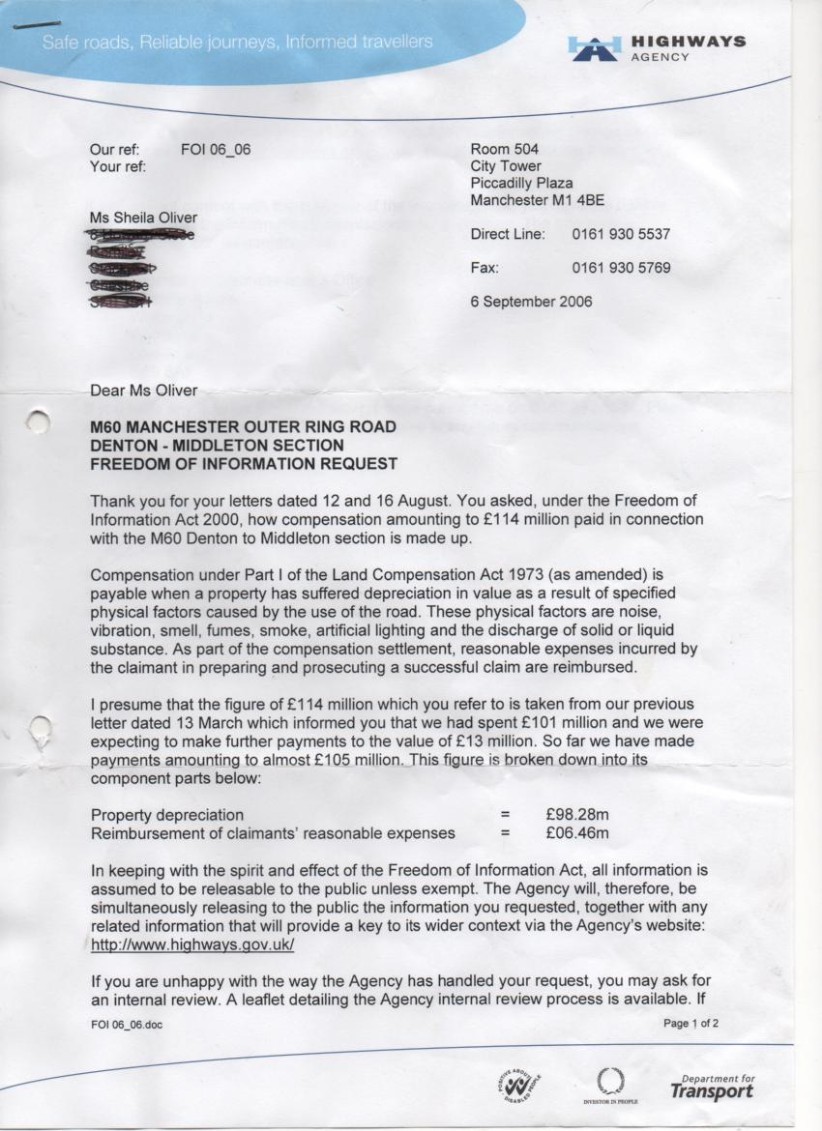 How much compensation was paid, I asked? £114 million was the reply.

What was the budget set for this, I asked?  Nothing, was the reply.

The Highways Agency can apparently find £114 million down the back of the sofa. The council taxpayers of this area cannot.

The M60 at Junction 25 was designed to accommodate the A6 (M), which had no planning permission at the time and still hasn't.  Therefore, the motorway disgorges its traffic at Bredbury, which causes a daily snarl up.

Accidents are down to bad driving and not the fact that traffic has to join the motorway in the fast lane.

They can't discuss the spray and standing water! 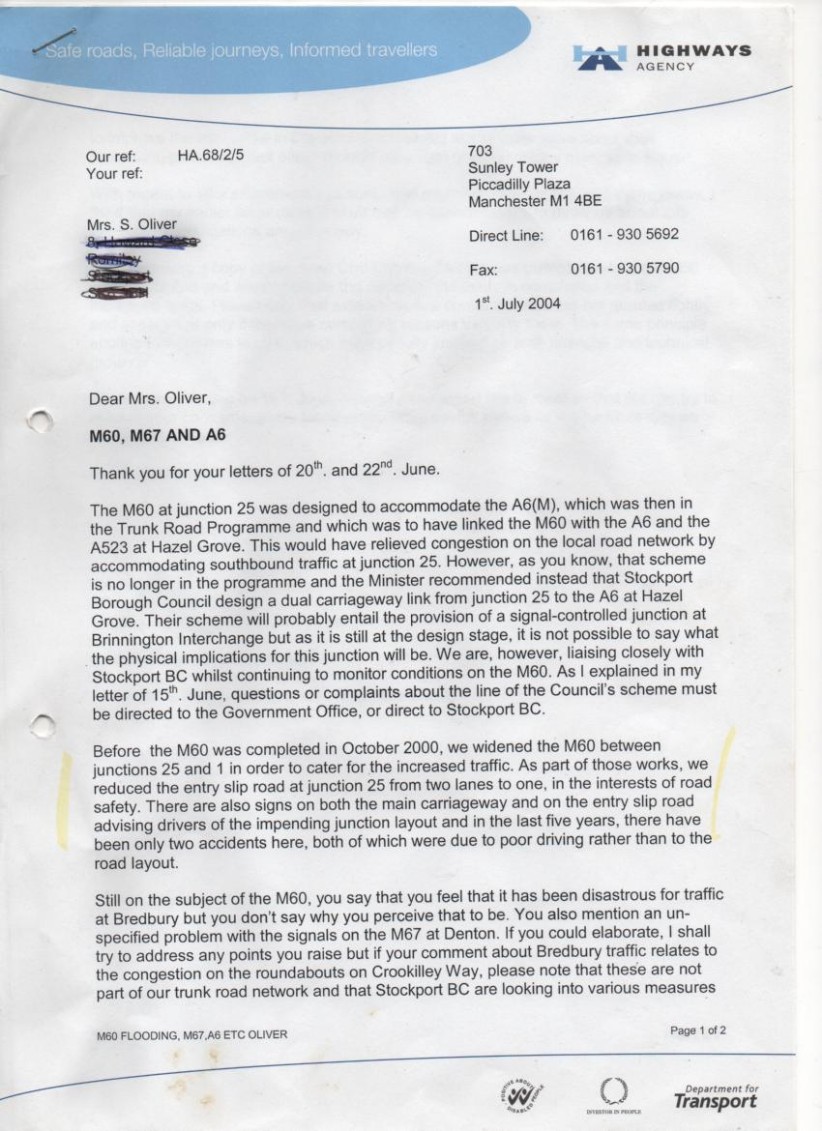 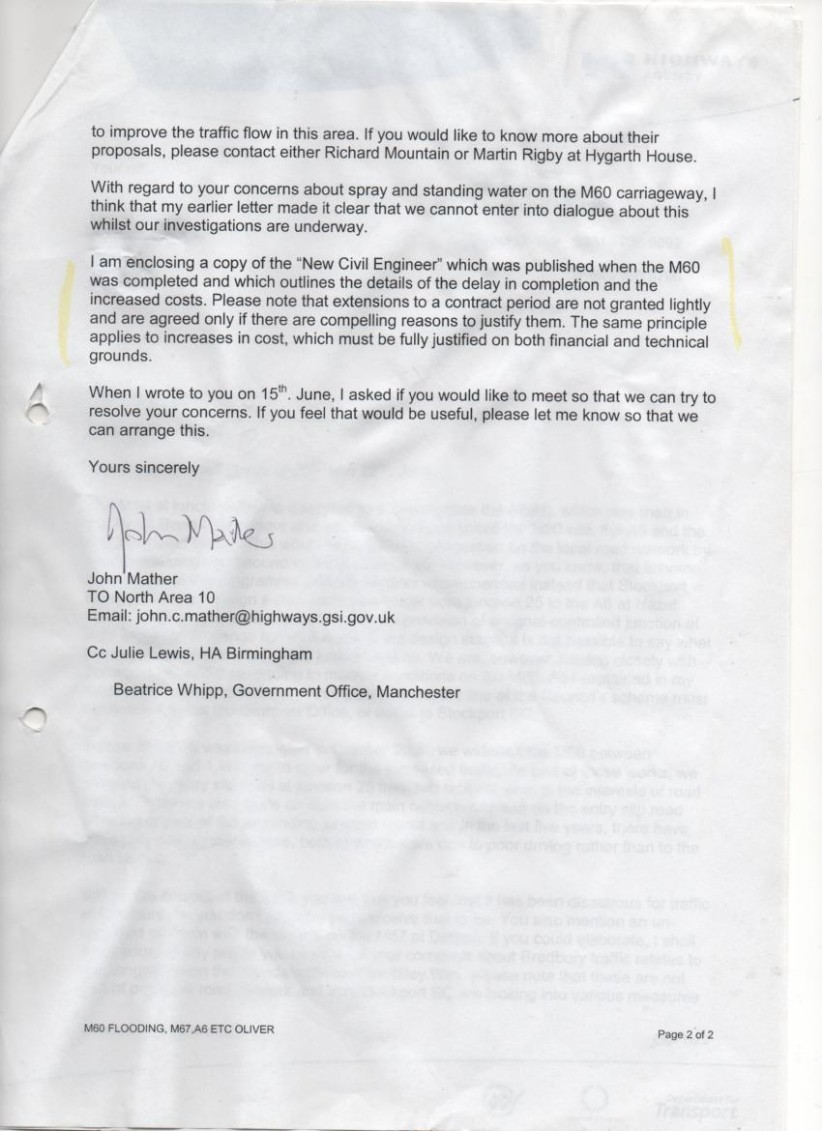 In addition to the cost overruns, and the water problems, there were also a lot of tragic deaths, mainly of young people,  at Junction 25.  Mercifully, since the installation of speed cameras, this has not been such a terrible problem. 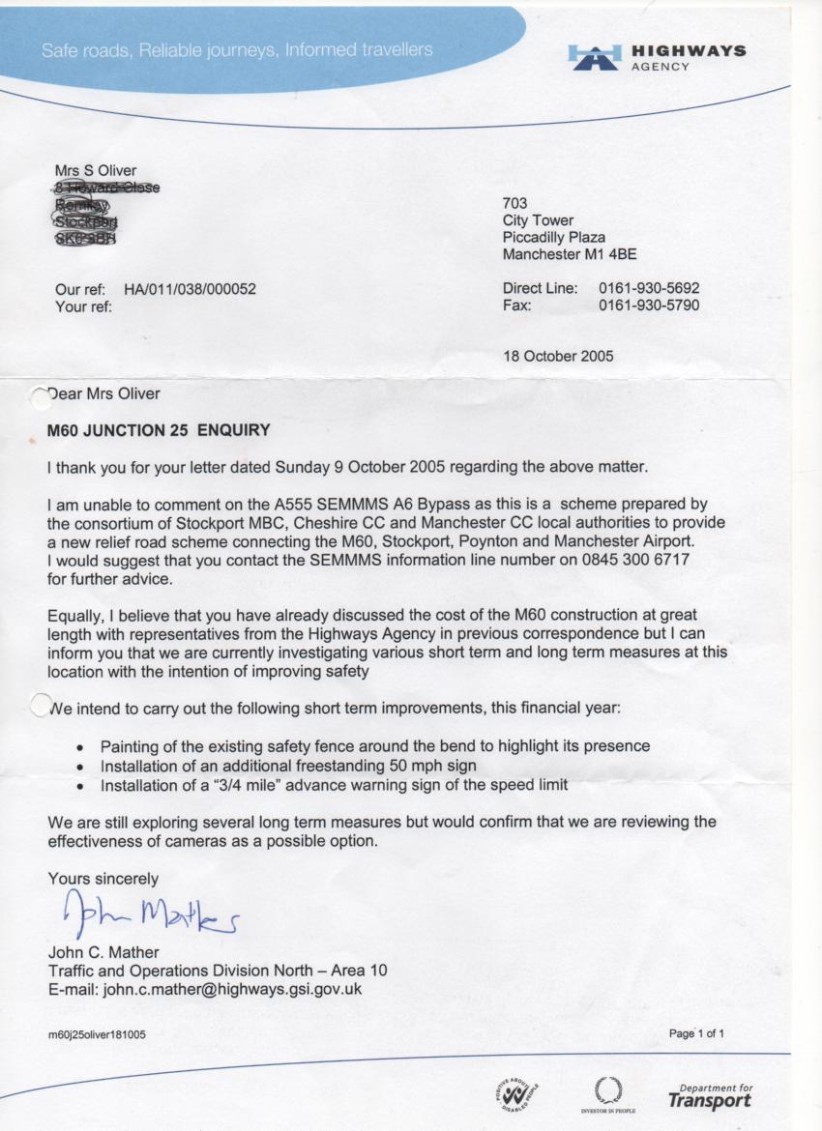 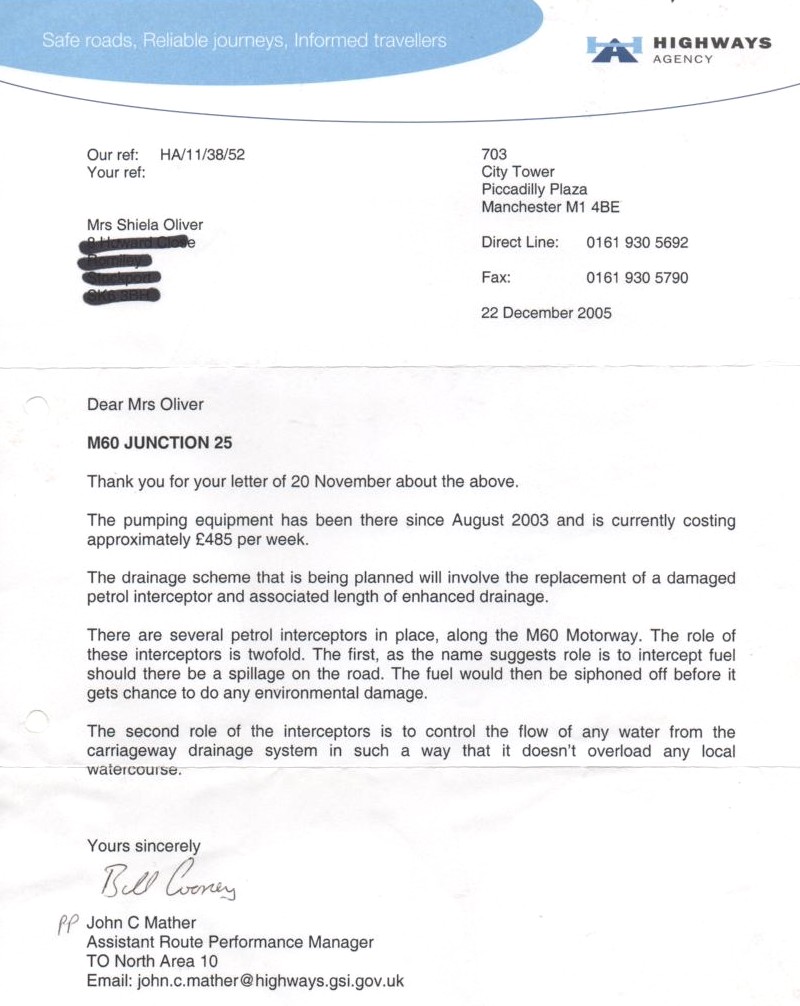 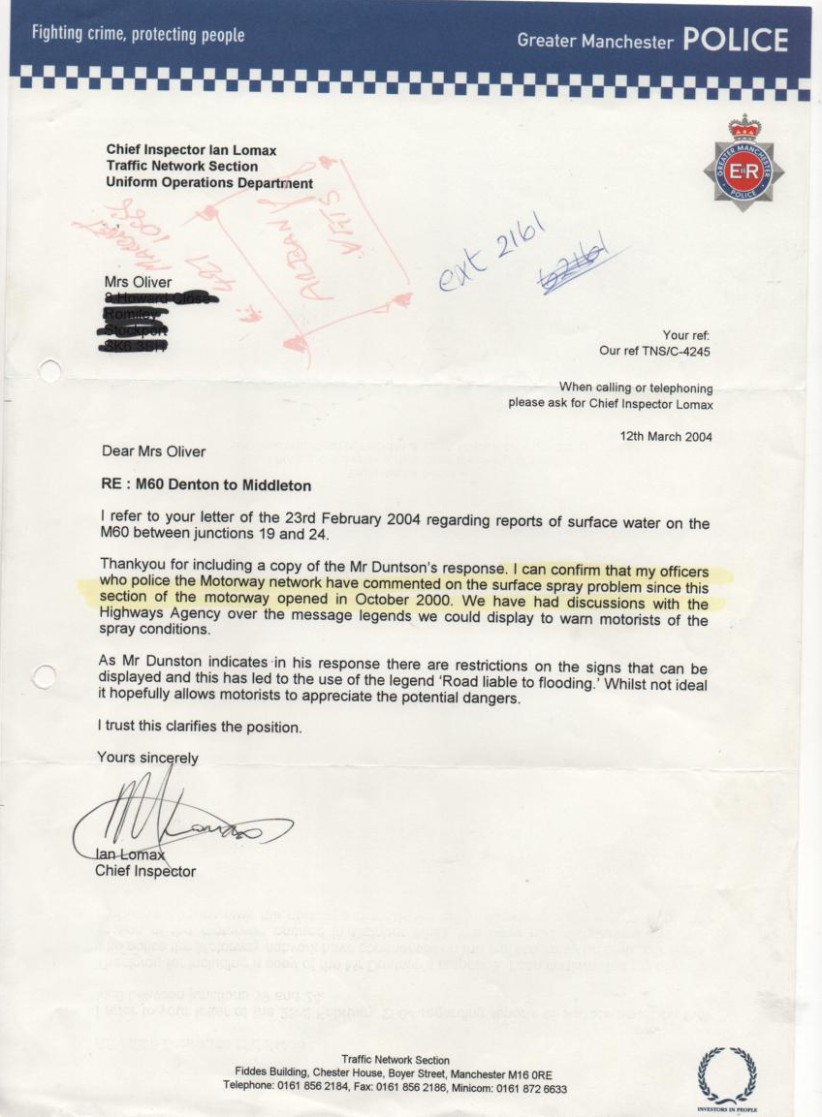